You may not be thinking about investing in stocks, but have you thought about investing in art lately?
Ok, so I have a vested interest. All the same, there is evidence that not only is art still selling, but will appreciate well over the next 10-20 years. So while your 401k may run out before you’re ready to retire, those paintings that you buy now could be an alternative to those iffy $1.86 GM stocks, worth over $43 earlier last year.

Here’s an interesting article from a Toronto based blogger/writer, Gabrielle Moser:

Wednesday, Feb. 25, 2009     Contemporary art a more stable investment than real estate.
My head is still spinning from a recent New York Times article I found thanks to Art Fag City‘s excellent “fresh links” feature about several renowned contemporary artists–including photographer Annie Leibovitz and painter-turned-film-director Julian Schnabel–who have taken out loans using their art or the rights to their artwork as collateral. According to the article, Leibovitz “borrowed $5 million from a company called Art Capital Group [last fall]. In December, she borrowed $10.5 million more from the same firm. As collateral, among other items, she used town houses she owns in Greenwich Village, a country house, and something else: the rights to all of her photographs.” 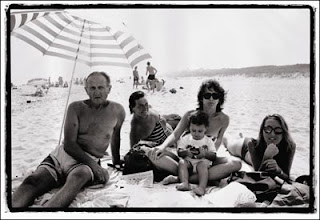 Aside from wondering why Leibovitz needs the money, and especially at such high interest rates (something she’s refused to comment on so far), I’m most curious about why the photographer is gambling the rights to her images for the loan when she has been notoriously protective of many of her photos; especially the images of her personal life, such as the image of her family above, and the series of photos of Susan Sontag, whose circulation in the public sphere has been tightly controlled until this point. In the credits and copyright lines for Leibovitz’s 2006 book A Photographer’s Life, for instance, it’s clear that none of the images of the photographer’s friends, family or partner have been sold to collectors. So why choose to gamble the rights to these images–which, if lost, would allow them to be more widely disseminated and likely in ways Leibovitz and Sontag would not (have) approve(d) of–rather than choose to sell a few editions to collectors to try and make the money outright?

The story of the Art Capital Group’s financial success, indicated by its anticipation of making more than $120 million in art-related loans in 2009, is also interesting given ongoing concerns about how the recession will affect the contemporary art market. Schnabel, for instance, leveraged the rights to his work for a loan used to complete a real estate redevelopment, which means it is apparently easier to borrow money in exchange for (good, celebrated, high market value) art than it is in exchange for real estate. Maybe this, along with the record-breaking sales at the auctions of Yves Saint-Laurent’s collections earlier this week, can be taken as a good omen for the future of the contemporary art market.