MoMA’s newest exhibit, Abstract Expressionist New York presents a good overview of the NY school of abstract expressionism during its heyday in the 40’s and 50’s. I just wish the curator had included some of the best of the women in the group; Mitchell’s and Frankenthaler’s more ambitious works aren’t featured and they are not among the ‘selected artists’ on the museum’s website. Even worse, most of the linked work at the site has no images for these artists. So we’re left to google the titles for imagery. 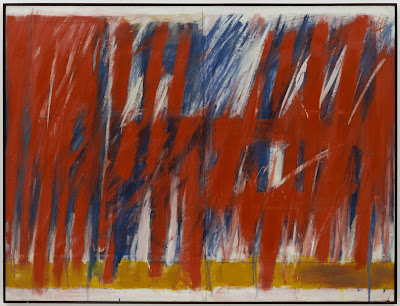 Unfortunately, this painting isn’t actually in the show–although it’s featured in all the press materials, which undoubtedly indicates a heartbreaking, last minute decision not to include it in the exhibition. Jack Tworkov (American, born Poland, 1900–1982), “West 23rd,” 1963, oil on canvas, 60″ x 6′ 8.” The Museum of Modern Art, New York. Purchase © Estate of Jack Tworkov, courtesy Mitchell-Innes & Nash, New York.

An artist’s legacy, for better or worse, is always up for negotiation. Drawn from the collection of The Museum of Modern Art, “Abstract Expressionist New York” presents work by the usual suspects – Jackson Pollock, Mark Rothko, Barnett Newman, Franz Kline, Robert Motherwell – alongside work by less familiar artists like Jack Tworkov, Bradley Walker Tomlin, Theodoros Stamos, Adolph Gottleib, Hedda Sterne,Grace Hartigan, Romare Bearden, William Baziotes, and James Brooks. Despite the ballyhoo that the show would be more inclusive than past Ab Ex offerings, the familiar easily outmuscled the newly anointed both in terms of wall space and inclusion in the press materials. Walking through the galleries I had to remind myself that each painting had been fresh and challenging in the moment of its creation – that the artists themselves, fierce but uncertain, spent hours looking, thinking and arguing about each incremental development, each artist fighting for a place in art history.

At the gala opening reception, the artists’ heirs and estate representatives remained aware of the glory of the Abstract Expressionists’ notorious competitiveness and the legend of their hard-earned struggle. At the same time, though, they understood that the campaign to achieve and maintain eminence continued well beyond the grave. Had the museum included enough pieces? Were they well installed in a prominent location? Did they stand up to the work surrounding them?

Contemporary artists and curators, however, look at the show differently. In particular, “Abstract Expressionist New York” may move them to loosen the rationalist grip on the art world that has recently taken hold. Rather than offering didactic explanations for each aesthetic decision, artists may rediscover the value in enigmatic, emotionally-rooted work whose meaning is intuitively derived and not so easily explained. In addition, the visual language could have an impact on contemporary practice. Early Abstract Expressionist pieces – especially work by Pollock, de Kooning, Newman, Motherwell, Kline, Arshile Gorky, Lee Krasner, and Richard Pousette-Dart – relied heavily on line to convey both symbolic and emotional meaning, but autonomous line, not in service to the grid or created through masking techniques, is rarely the primary focus in painting these days. For my money, there’s nothing quite as poignant as the uneven quality of a hand-painted line. Painters might examine the show and rediscover how powerful line can be.

The best retrospectives – and Abstract Expressionist New York rates as one – are those that influence the contemporary dialogue. To get things started, MoMA has scheduled artists to give talks in the galleries.

Free with Museum admission. Sign-up begins on a first-come first-served basis at 3:00 p.m. outside the fourth floor exhibition entrance, where the tour begins. Groups are limited to twenty-five people. Additional Gallery Talks will take place in spring 2011, with details to be announced.